The new adventures of Content Services: Preikestolen is not the only rock

For the last seven years, NoA Ignite’ Content Services team have been writing, translating and publishing numerous articles about one of Norway’s biggest rock stars: The mighty Preikestolen cliff. Last weekend, we finally got to experience it in real life, on a department trip to Stavanger.

I thought I knew everything there is to know about Preikestolen (the Pulpit Rock in English), but as we pass a stretch full of large boulders halfway to the top, I realise that I have new questions. I’m aware that the cliff was formed by moving glaciers during the last ice age, some 10,000 years ago – but how and when did people find out about it? And what on earth were they doing in what must have been impossibly wild and impenetrable terrain? 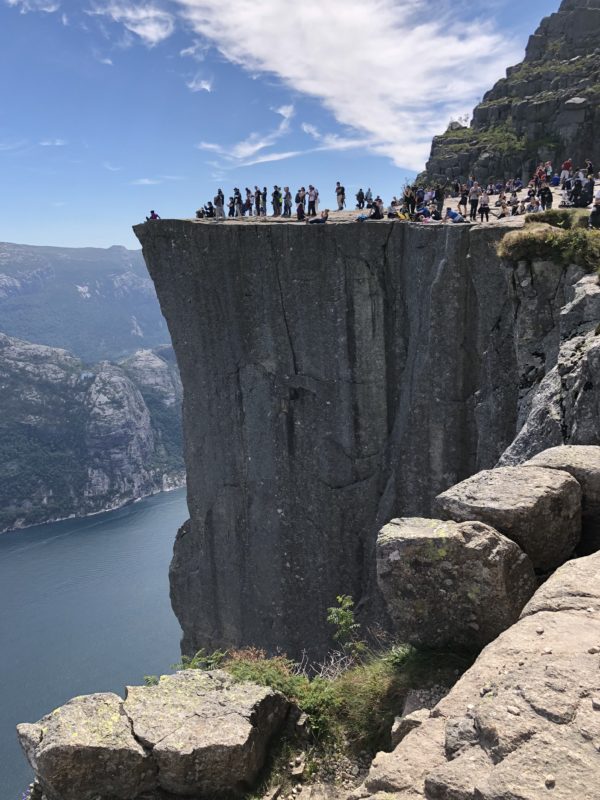 We have booked the longer and more challenging “off the beaten track” route to Preikestolen, which means that we are accompanied by mountain guide Hilde from Outdoorlife Norway and her husky dog Molly. Luckily Hilde has an answer to everything, including the story of how Preikestolen was discovered:

Around 1900, athlete and gymnast Thomas Peter Randulff travelled on a steamboat across the Lysefjord, and the captain of the boat brought his attention to the cliff high above their heads. Struck by the remarkable shape, which resembled a pulpit, Thomas Peter promptly decided that he would try to get there. He asked the local farmers to join him, but they were not very impressed – why would they want to do that? And anyway, they were too busy looking after the animals. Finally he persuaded a few young lads and they set off on their mission. They succeeded at the first attempt, which is quite a feat as it can’t have been particularly easy to get up there without today’s prepared hiking trail.

Little did he know what he had started – as word spread about the route to Preikestolen, more and more people wanted to get there. Already in the 1920s, hundreds of people had come to see the spectacle with their own eyes. In 1949, the Preikestolen Fjellstue (mountain lodge) was built to make it easier for hikers to reach the the top. Since then the numbers have grown slowly but surely. Over the last few years, Sherpas from Nepal have come in the summers to build stone steps along the hiking trail. They have done an excellent job, and it is now possible for most people to make their way up in only a couple of hours. And boom – suddenly some 300,000 people step out on the natural viewing platform at 604 metres above the fjord every year. 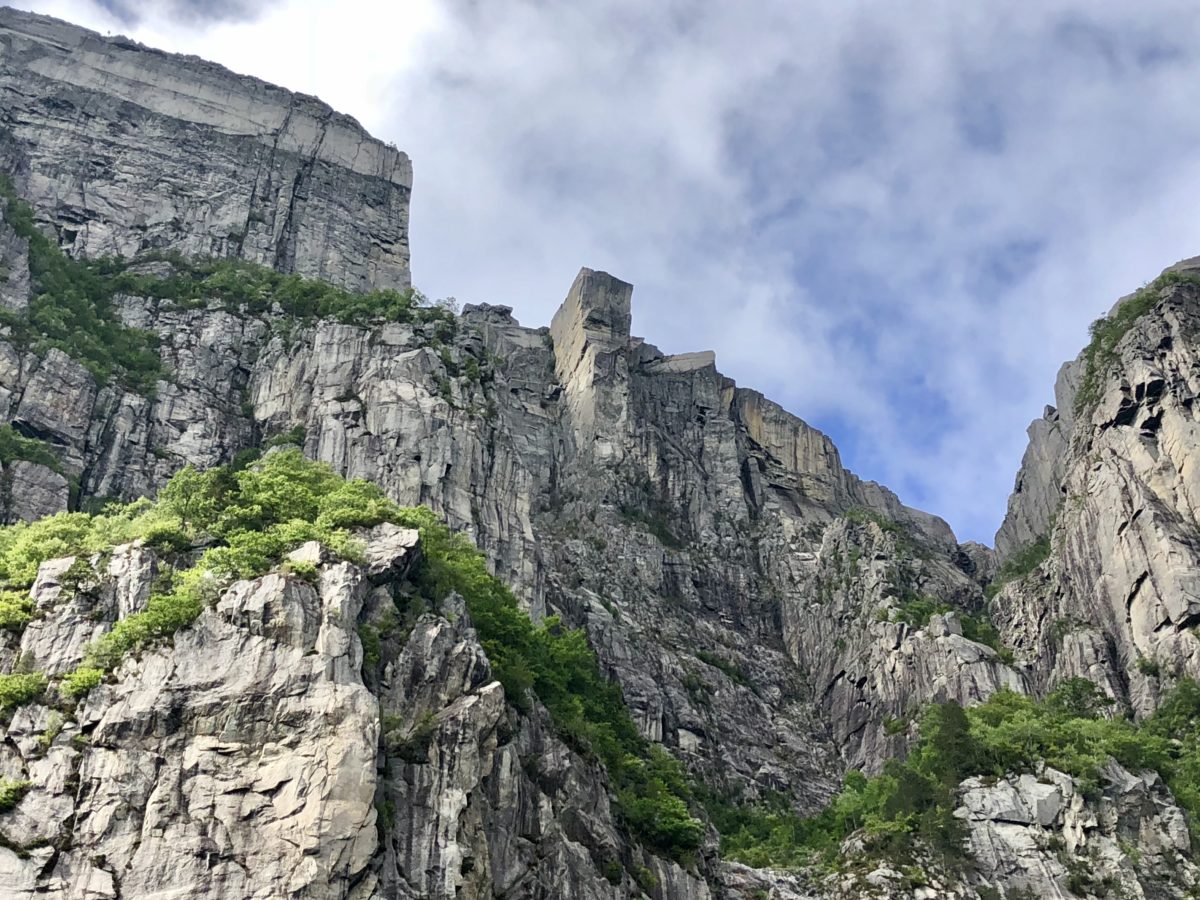 Preikestolen viewed from the water 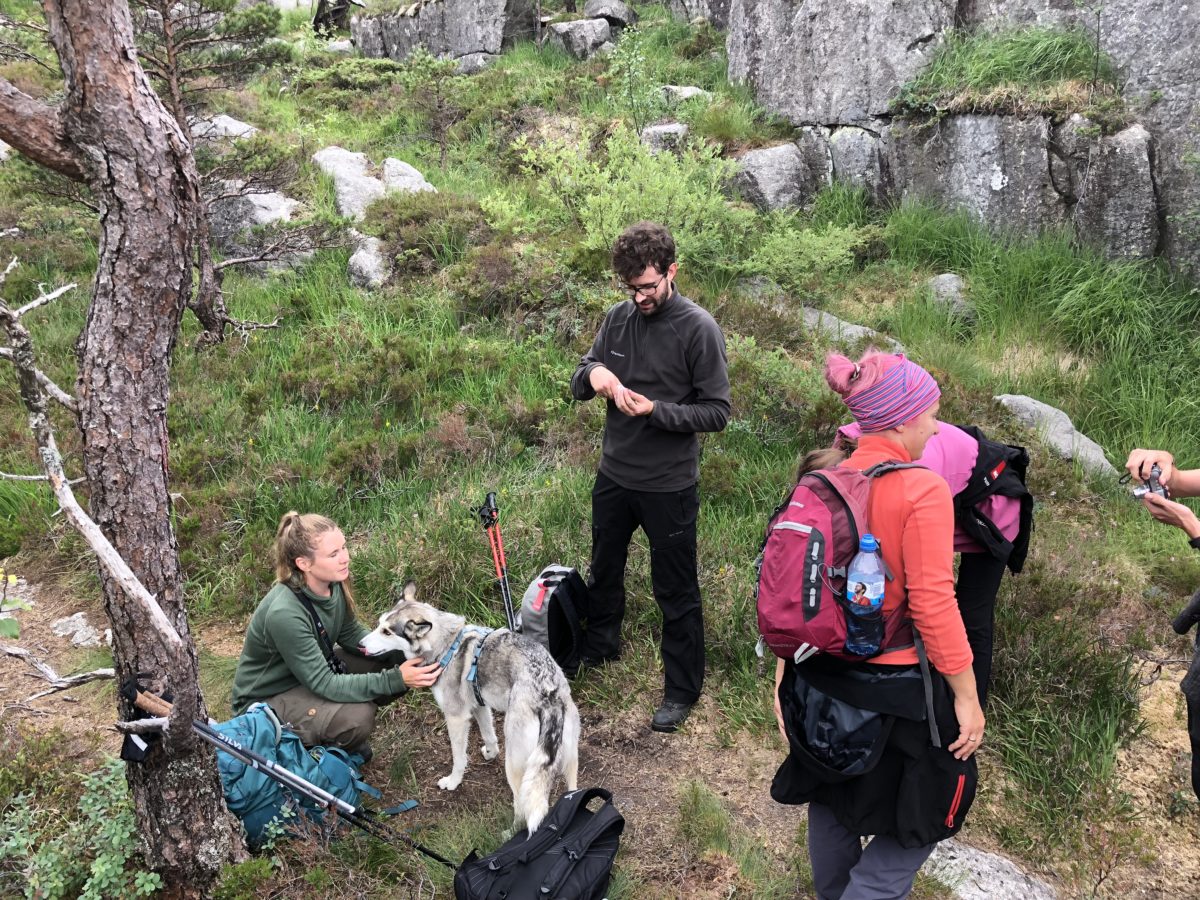 Ready to rock with Hilde and Molly

It was partly the thought of the crowds that prompted us to book the more demanding route. It is quite a trek which includes a short trip by canoe, followed by a long hike in untouched nature and a little bit of light climbing (or rather “scrambling”, as we learn from Hilde) towards the end. For inexperienced or unfit hikers, it is hardly a walk in the park. But having the route all to yourself with astonishing views in all directions makes it worth every step. 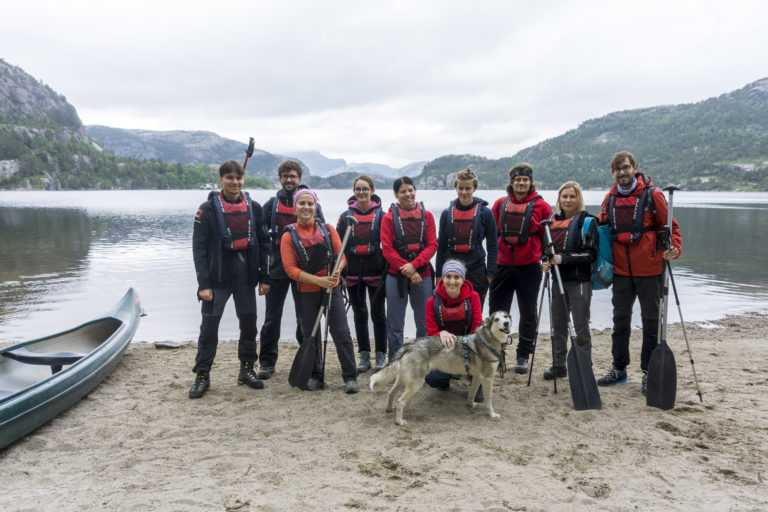 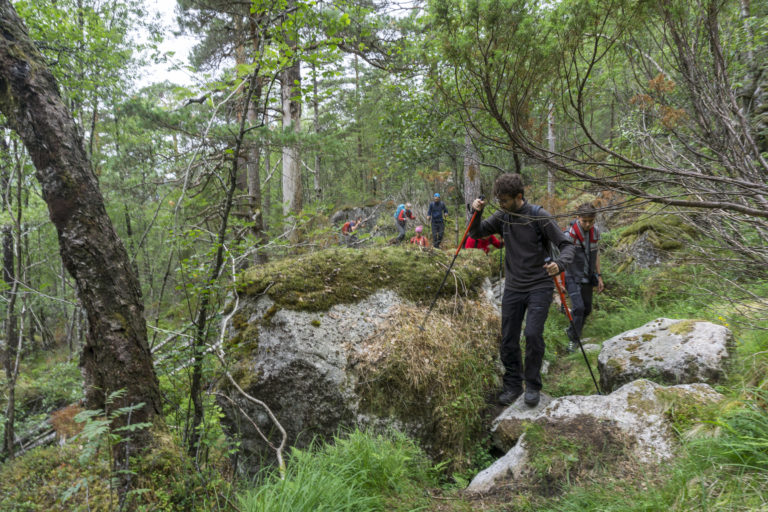 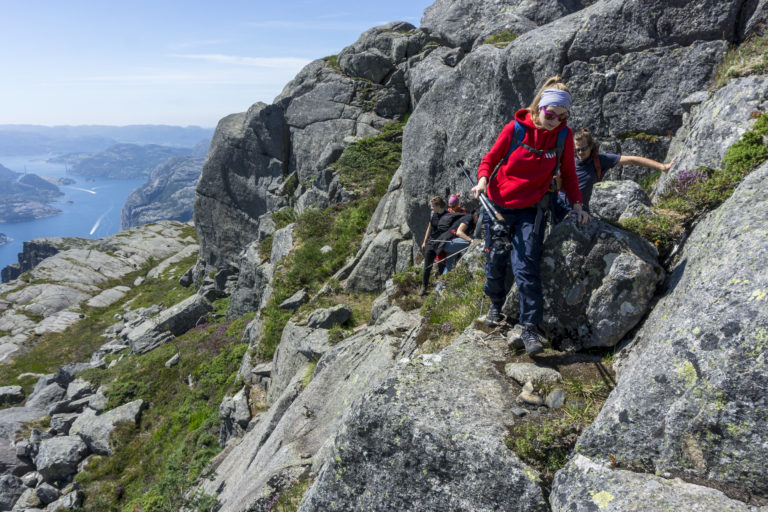 Of course Preikestolen is the goal of the hike, and for sure it is amazing when you finally arrive and can take in the cliff and the Lysefjord from above. At the same time, after spending several hours in fabulous, serene nature, it is a bit odd to suddenly be surrounded by chattering people from all over the world, queuing up to take a selfie by the edge of the plateau. I wouldn’t say that it’s disappointing – not at all – and I was not going to leave without a selfie myself. But I was very happy that we made it up there on an alternative route.

In summary, hiking to Preikestolen is super cool but it is clearly not the only rock. By all means travel here for Preikestolen, but don’t make Preikestolen your one and only stop. The area is chock-a-block with hiking trails with fjord views, clear mountain lakes, thick pine trees, blueberry bushes, patches of bright pink heather and endless peculiar rock formations – and you don’t need a particularly lively imagination to see that the big boulders are really sleeping trolls.

To go to Stavanger and only see Preikestolen is a bit like getting a copy of the Rolling Stones’ Out of our heads and then only listen to (I can’t get no) Satisfaction.

So what about Stavanger? It is definitely worth seeing, especially if you’re into food and street art. We had the best fish soup ever at Fisketorget and noted that we missed the Gladmat food festival, which takes place next week. There is however still time to plan a visit during the Nuart festival in September. Just be aware that it is quite small and quiet – there are probably more seagulls than people in this city.

From Stavanger, you can go to Preikestolen on a day trip. Or book yourself a bed or room for a night or three at the excellent Preikestolen Fjellstue, situated just by the hiking trails. 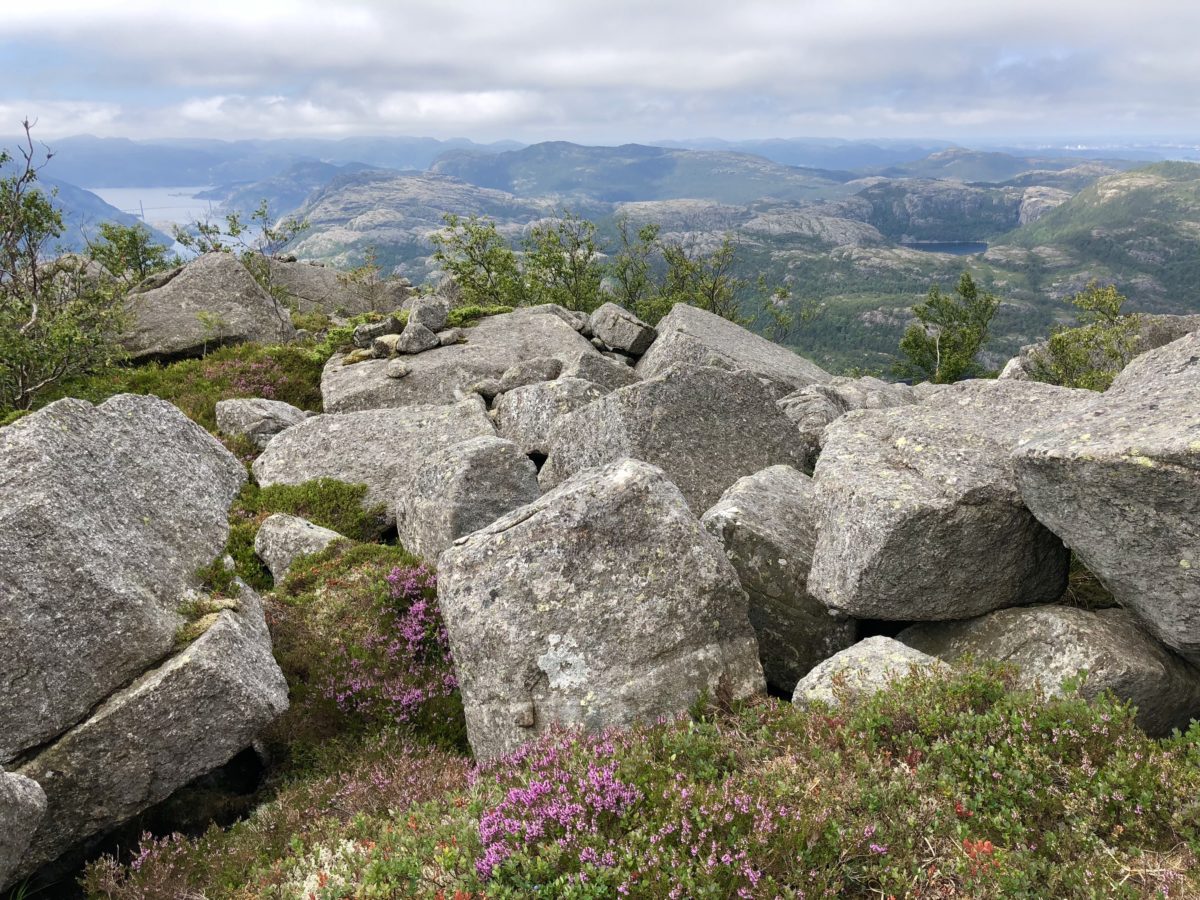 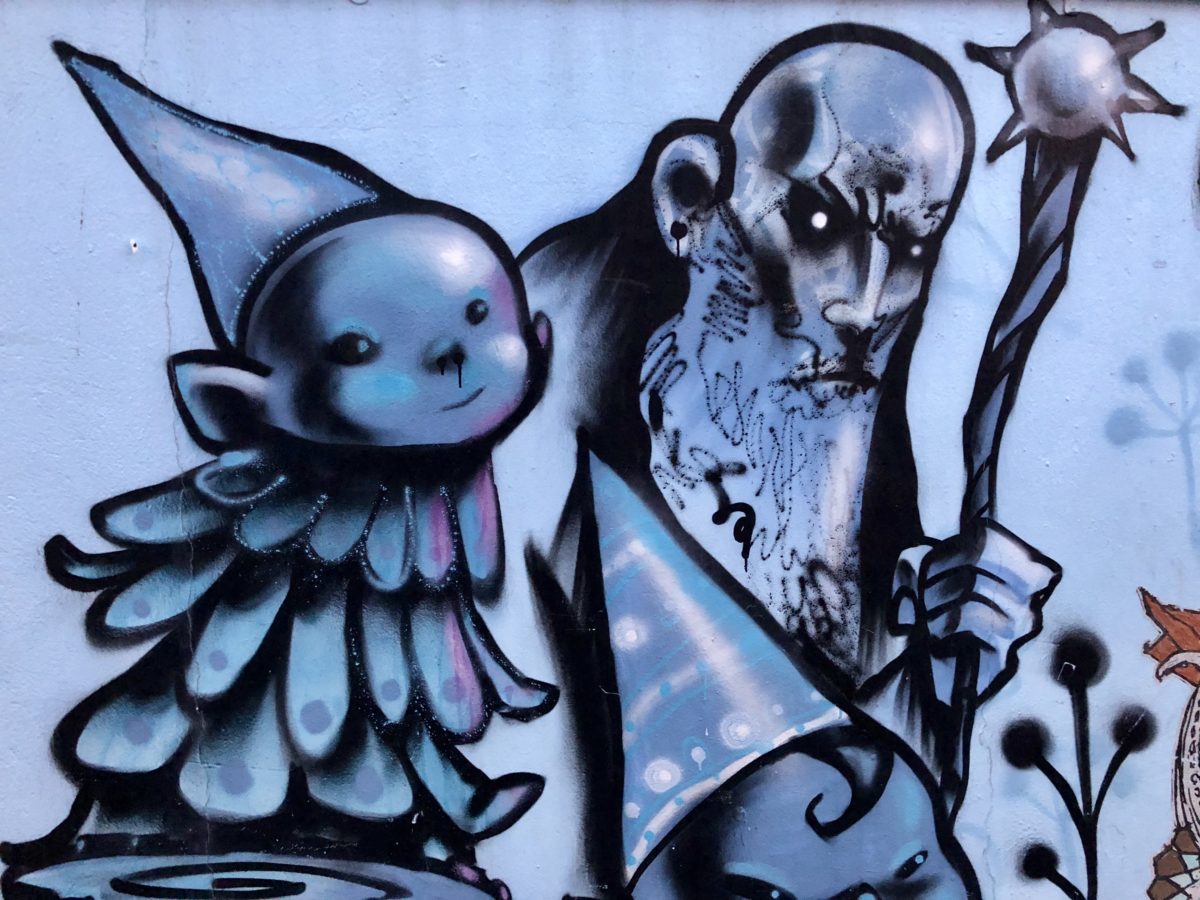 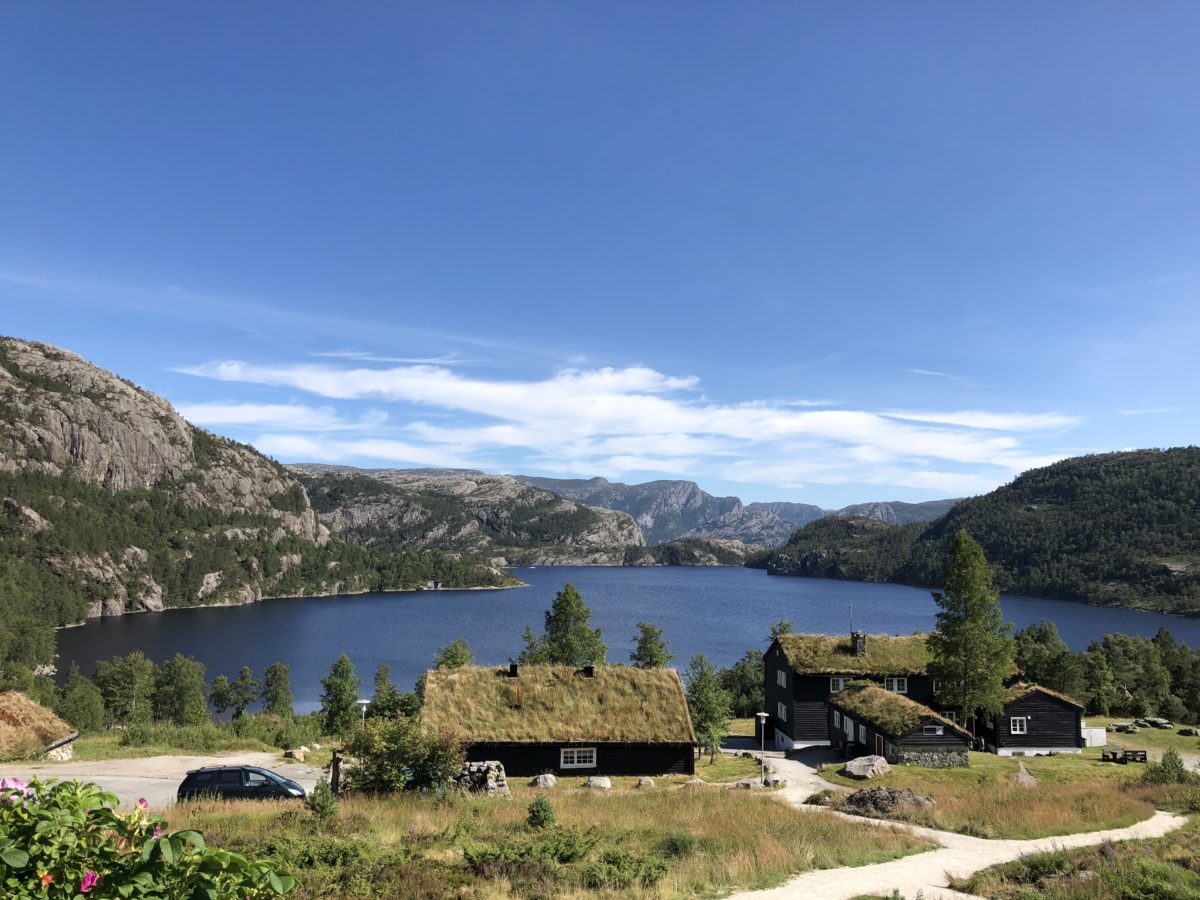 The view from Preikestolen Fjellstue

See what else Anja has blogged about

Check out Outdoorlife Norway’s Off the beaten track trip