NoA Ignite is ready to run beyond the horizon

On Sunday 14 September 2014 it is time for another edition of the Kraków Business Run. With five teams of runners and one team creating the run’s official app, NoA Ignite has already been preparing for this charity event for months. Get inspired by the background of the run, and get involved in this noble initiative.

One of the most inspiring stories I have ever read is “Każdy ma swoje Kilimandżaro” (“Everyone has their own Kilimanjaro”). It proves that dreams can come true and the impossible can be achieved. The story describes how a team of true dreamers made the tough trek up to the Uhuru peak, 5,895 metres above sea level. Undeterred by obstacles like visual impairment, missing limbs and prostheses, they helped each other through a tropical forest and a volcanic desert, conquering altitude sickness on the way. This is the first time I heard of Jasiek Mela, who was one of the participants. Now, Jasiek Mela’s foundation Beyond Horizons helps others achieve their dreams.

NoA Ignite has supported Beyond Horizons since 2012 by participating in the Kraków Business Run charity event. In 2014, the run takes place in five cities: Kraków, Poznań, Warsaw, Katowice and Łódź, under the grand title the Poland Business Run. The purpose is to raise money for prostheses for Beyond Horizons’ beneficiaries.

The Poland Business Run is a team experience on all levels, from the planning stage and event organization through to the run itself. You need to be a team to sign up for the run, and you need to complete the run as a team.

This year, NoA Ignite has six teams getting ready for the run. In addition to five teams of runners we also have one team preparing the Poland Business Run mobile application, developed for both participants and supporters.

The app contains all the information you need about the run and makes it easy to search through the team lists in the participating cities. You can also choose your favourite teams and promote them on Facebook. By supporting the teams through the app, you help the beneficiaries of Jasiek Mela’s Beyond Horizons.

For Kraków and Warsaw, live tracking will be available as a bonus feature. Live tracking means that you can follow the approximate position of your favourite teams on a map during the run. Just make sure that you have added the teams to your list of favourites – otherwise they will not be displayed on the tracking screen.

Just like the event itself, the mobile application project was very much a team effort. We would like to take this opportunity to thank NoA Ignite’ management team and our colleagues for making sure the application saw the light of day.

We had great fun and learned a lot during this project. We now keep our fingers crossed for all the teams on 14 September 2014 and hope that you will have fun too!

The Poland Business Run app is available on Google Play and in App Store. 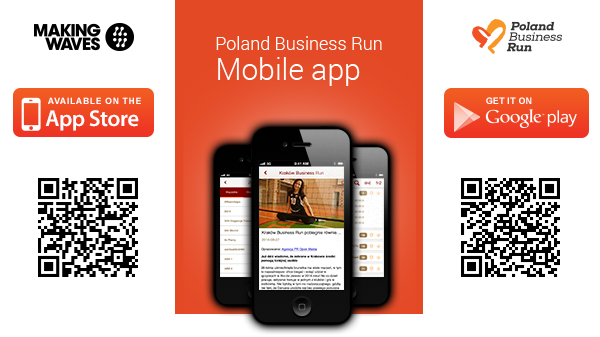 Anna came aboard NoA Ignite as a Senior Project Manager in 2014. She has worked in the international business environment delivering projects to the largest European-based multinational corporations operating in telecommunications. After hours she can’t sit still, so it may be tricky to catch up with her in the water or on the ground. And she smiles a lot.