How to write clearly: 3 valuable lessons from the Hemingway Editor app

As a newbie UX writer, I have made it my top priority to make sense to the reader. The Hemingway Editor desktop app gave me some priceless tips.

What is the Hemingway Editor?

The Hemingway Editor is a free desktop app that checks how readable a text is. Add any text into the app, and it will rate its readability. It even gives you suggestions on how to improve your rating.

Nifty! Let’s try it out.

What did the Hemingway Editor have to say? Here’s a snapshot of the result: 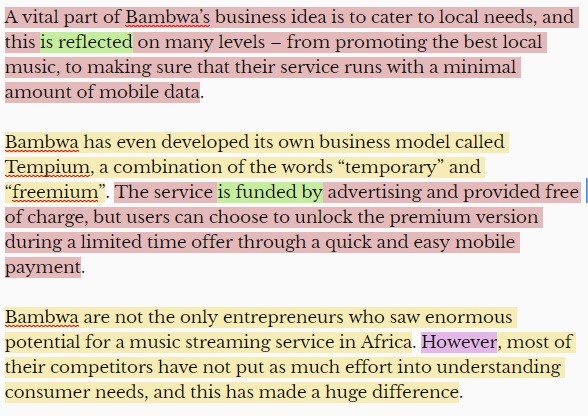 Full of scepticism, I fed Hemingway another article, written by an experienced copywriting colleague. The app mercilessly marked almost every single sentence in red. My word.

I was confused. Was my article bad? Was the article by my senior colleague even worse? This had to be investigated further.

I entered yet another article. I chose one which in my opinion is both terribly written and hard to follow. What was Hemingway’s verdict? Well, there was definitely a lot less red and yellow than in my own article. Seriously?

At this point, I was ready to put Hemingway and his editor in the bin. But then I decided that it would be better to try to understand what was going on.

How does the Hemingway Editor work?

According to their Help page, the app

“… builds on the innovations of researchers of a field called ‘Readability’. These researchers study how understandable a piece of writing is.”

The researchers have tried to find out which US grade level is needed to understand a text. Studies show that the average American’s reading skills corresponds to a 10th grade level (15- or 16-year-olds). So if we want to make sure that most people can read our text without problems, this is what we should aim for.

I went back to my own article that Hemingway had crushed. The overall grade I got was 12, with a recommendation to aim for 9. So what exactly did the app highlight?

Oh – of course I already knew that long sentences are harder to read than shorter sentences. But I didn’t know that most double-length sentences with a relative clause, comma or conjunction are considered too long.

The word “however” is marked as a word with simpler alternatives.

To be honest, it has never occurred to me that “however” would be hard for anyone to understand.

Hemingway also points out all adverbs in a text and suggests that you swap them for a more powerful verb. An example given by Hemingway is to write “tip-toed” instead of “walked slowly”. OK, but are all adverbs bad? Probably not, but it doesn’t hurt to consider which ones are really needed.

Interesting – clearly it is a terrible idea to rely on my own judgement to decide what is easy or hard to read for others.

But, you may say, should we really aim to write at a lower grade level because of the estimated reading skills of the average American? Isn’t that to dumb down our writing? Not necessarily! The Hemingway Editor points out that Ernest Hemingway’s work scores at 5th grade. In other words, it is possible to write clearly and intelligently at the same time.

I gave Hemingway one last article to check. This time, I picked a perfectly well-written blog post in my view, written by UX Writer Mariana Posniak. Hemingway was over the moon, giving it an overall grade of 4. Impressive. So that’s the way to go.

After fiddling a bit with my own example text above, Hemingway awarded me a grade 8: 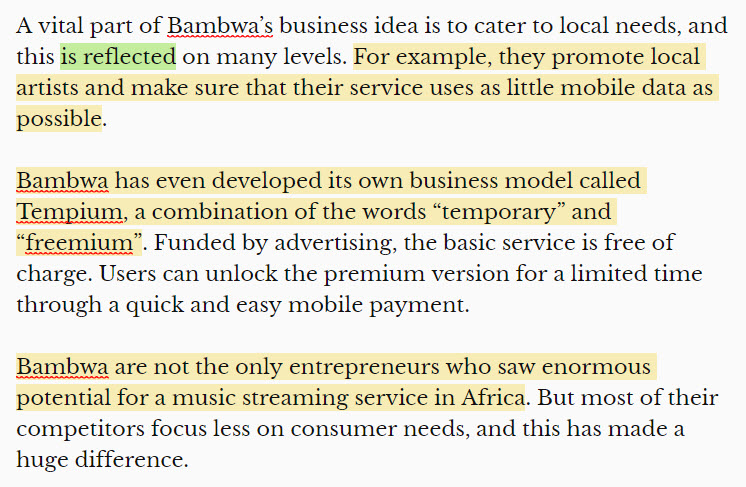 Was that so hard? No!

Is it easier to read? I think so!

And is it somehow dumber than my first example? I’d most definitely say no – unless it is considered dumb to start a sentence with but instead of however.

In summary, here are

3 valuable lessons from the Hemingway Editor

At the end of the day, the main question is: Do we want to make sure that our texts can be understood by most people? If the answer to that is yes, we had better listen to Hemingway.

PS I’m pleased to say that Hemingway rates this blog article as a 4.