Cross-cultural collaboration has its ups and downs. On a bad day, you might feel like you are working in the tower of Babel just before it is about to collapse. In this article, I will explore the importance of cultural differences, in particular differences between Poland and Norway, and analyse how these differences affect how we behave in specific situations.

How many times have you, an excellent consultant working in a cool, international company, asked yourself: What on earth is wrong with them (read: colleagues from a remote office)? Why do they expect me to act differently than I am used to? They seem to live on a different planet!

Sometimes, this kind of frustration builds up and distracts us from our tasks. Instead of working together to deliver a successful project, we mentally divide the team into us (who work well together and speak the same language) and them (strange foreigners who pick on us constantly).

There is not one simple solution to this problem. I know from experience that it can take around five magic years to transform two midsized remote offices into one well-functioning entity, and many aspects have to be taken into consideration. For now I will focus on one of them: culture.

What is culture? There are many studies on the subject and numerous definitions – this is the one I like the most:

Collective programming of the mind that distinguishes the members of one group or category of people from others (Geert Hofstede).

Culture is not something that we are born with and we also have to distinguish it from our personality. We learn a culture. This programming starts during our childhood by being a part of a family and continue as we grow up. Whether we like it or not, we have a gender, we are part of a nation, we work in an organisation. All these groups or categories of people unconsciously program our mind so that we can function smoothly. Every one of us is a complex combination of cultures from different sources and levels.

The most interesting aspect in the context of this article is our national culture. What makes us (our nation) different from others? Why it is important to understand cultural differences? Can we avoid thinking in terms of us and them by becoming aware of these differences?

Geert Hofstede is a Dutch social psychologist who proposed six dimensions through which a national culture can be assessed thus also compared.

Hofstede’s research also provides actual scores for most of countries. To visualize how these dimensions can be used to assess and compare national cultures, the scores for Poland and Norway are available below. I will comment on selected scores and draw some conclusions of how they may affect collaboration across borders. 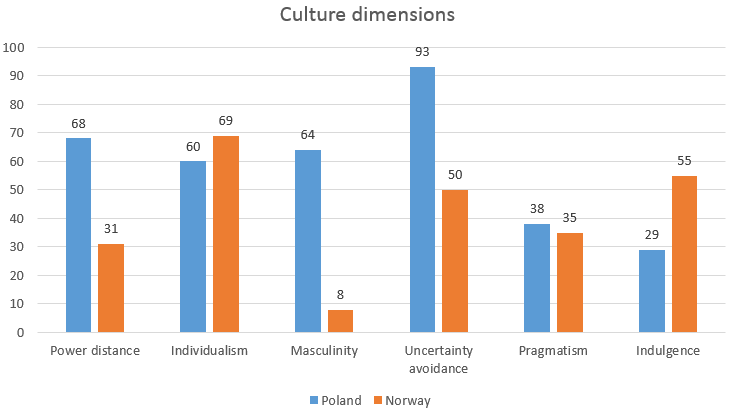 One of the most striking differences between Poland and Norway is the score for masculinity. Norwegian culture is perceived as feminine (8) as opposed to the masculine Polish culture (64).

Organisations with a high feminine score tend to promote good working relationship with superiors and with people who cooperate well with one another, solve conflicts by compromises and negotiations, practise management by intuition and consensus, and have a gentle approach to work-life balance. In addition, career opportunities are often equal for both genders, which leads to a high percentage of women in managerial positions.

In Polish organisations on the other hand, managers are expected to be assertive and take decisions. This puts an emphasis on equity, competition and performance. Conflicts are resolved by fighting them out. Feedback is more direct, no matter if it is positive or negative.

Power distance is another dimension where the difference between Polish and Norwegian culture schemes is significant.

Polish culture is ranked quite high, which means that there is a significant dependence of subordinates on their managers and that the emotional distance between them is relatively large. People accept hierarchical order. This is indeed characteristic for many Polish companies – there is often a complex organisational structure and the barrier between managers and employees is usually high.

Norwegian culture promotes the opposite scheme. Hierarchy is for convenience only, people have equal rights and power is decentralised. The management facilitates and counts on the experience and knowledge of the subordinates. Employees expect to be consulted. Communication is quite direct and focuses on reaching consensus.

Last but not least, I would like to comment on uncertainty avoidance. The difference between Poland and Norway is 43 points and Poland is ranked very high (93). It means that members of Polish culture feel threatened by unknown and ambiguous situations. There is an emotional need for rules, people have an urge to be busy and work hard. They also promote precision and punctuality as the norm. Security is an important element for individual motivation.

How do these cultural differences impact our daily work? Of course all the dimensions are generalisations derived from national cultures, and as such they cannot be treated as given. Here are a few examples of how certain situations may be seen from different perspectives:

These are just a few examples of how members of different cultures may view the same situation. By raising awareness of possible implications, we have a good chance to improve the situation. At least then we can take the differences into consideration when we try to understand a different perspective.

At the same time, it is also good to keep in mind that: